The #MeToo Movement galvanized women. From Los Angeles to Shanghai, from Hollywood studios to board rooms and political office, women are sharing their stories of sexual harassment and assault.  And it has inspired a huge wave of activism that shows no signs of slowing.

However, some analysts say that as much as this new wave of feminism has brought women together, it has also caused a rift.

According to an Associated Press story, there is a generational divide in the public’s reactions to the #MeToo movement.

“Millennial women,” it said “are more likely to have grown up in environment supportive of gender equality, with the expectation — not always fulfilled — that they’ll be attentively listened to in those circumstances.”

It was an interesting thought. Women, according to this piece, are not only fighting for a seat at the table, they expect it. It’s uplifting. It’s believing that we are at the actual precipice of change. 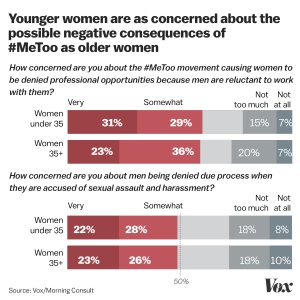 Jade Hameister skied around the North Pole, across Greenland’s largest icecap, and then around South Pole. It took her 37 days to complete the 373-mile trek, while dragging a 220-pound sled across the rugged, frozen landscape of the Antarctic.

Hameister is the youngest person to ever complete the adventure referred to as ‘The Polar Hat Trick’.

That should be the story. She battled harsh winds and extreme temperature to accomplish a feat that few people – of any age – ever will.  She demonstrated incredible resilience, determination, athleticism and tenacity.

But, the story reported in media outlets around the world was not about the high winds, the blizzards or the whiteouts that she faced; it was not about the journey or the training involved to achieve this feat.

No, the story was about her gender. Worse, it was about how she responded to sexist comments on Facebook . She posted a photo of herself and a message: “I skied back to the Pole again… to take this photo for all those men who commented ‘Make me a sandwich’ on my TEDX Talk.” Then added: “I made you a sandwich (ham & cheese), now ski 37 days and 600km to the South Pole and you can eat it.”

This was the story on CNN and Teen Vogue. A snarky response to internet trolls. That was the story that Samantha Power and the Twitter handle Bad Ass Woman Alert shared.

I don’t see a generational divide.

It feels good to taunt a Twitter troll. It’s fun to flaunt one’s success. But, for all the talk of gender equality, for all the social media activism – from #BeBossy to #StrongIsBeautiful to #AskHerMore and #LikeAGirl, social media movements have come and gone, usually to sell makeup or shampoo.

Generational divides exist. They always have. For generations, women have fought for the right to vote, to work, to be heard. Each new fight is built on past victories.

Are there differences of opinion? Differences in philosophy? Certainly. Just as there are differences between mothers and daughters, and even among friends. The bigger question is whether this new wave of feminism is here to stay, whether it will lead to lasting change, or whether it is relegated to the graveyard of forgotten hashtags.

But, do I believe that this is the beginning of actual change? We’ll see.

I recently attended a bridal shower, one of those consequences that I face as a result of accumulating too much bad karma. I am only half kidding. There’s just something awful about one hundred or so women in one room. There’s only so much gossip, small talk and platitudes that I can take.

Bridal showers may seem frivolous; but, it is an opportunity for women to celebrate and share.

Anyway, to make matters worse I was assigned a seat in an “older” table. So apparently I no longer quite fit in with the young, hip crowd, making me all the more eager for the mimosas – the only respectable alcoholic beverage that one can consume at 11 in the morning while surrounded with flower arrangements and petit fours.

So at my table of mothers and grandmothers, working moms and homemakers, talk was pleasant. They discussed the bride, the décor, recently failed marriages, and the best recipes for torrejas, the Cuban version of French toast.

Then, as is usually the case in any and all gatherings involving Cuban exiles, it wasn’t long before the conversation turned to politics and talk of the old country. Ever since I can remember, there was not one party or social event, in my family or in any of my friends’ families, which did not involve at least one long and heated discussion about Cuban politics. Most interesting of all is that this seems to be an experience that is largely unique to my generation.

I was born here in the United States, specifically in South Florida. My parents’ generation struggled to begin anew and assimilate into a new culture. That’s part of being a hyphenated American. And I am definitely hyphenated, a part of a generation who is American, but still has an affinity for a land, a country, a culture that we never knew and no longer exists. I am a hybrid, which sometimes feels more like a violent clash, of cultures.

And so this environment of passionate debates about policy and past battles, errors and injustices, one that I am so accustomed to, is something that I don’t think that my generation’s children will hear much about, not to mention the generations that follow.

But today, at this bridal shower, the conversation was different. Not only was the volume significantly lower, but it also crossed a few invisible borders in the Cuban-American community. There are several unspoken, but definitive, boundaries that exist between exiles – mostly determined by the time period in which they emigrated to the U.S.

This conversation involved various generations of exiles. These women, of various ages and socio-economic backgrounds, arrived here at different times, ranging from the late sixties to the mid-nineties.

And so their views and experiences varied.
But the biggest difference between this discussion, and the countless others I’d heard throughout my lifetime, was the content. Being a female only event, the focus of the discussion was different. Rather than discussing politicians, dictators and ideology, the conversation revolved around the home and family. It had more to do with what one mother called a “lack of everyday needs.”

As the conversation evolved, I was struck – not only by the tragedy that is Communist Cuba – but by the fundamental difference between men and women, between the fighters, hunters and gatherers and the nurturers.

It isn’t that women do not care about politics. It is not that they do not appreciate the importance of a free press or that they don’t also feel oppressed. It’s that, for the most part, a mother’s primary concern is her family. So what she tries to do is make life as normal as possible. So, just like June Cleaver and Donna Reed baked cookies for their TV families, Cuban mothers bake flan. When they could no longer get eggs or milk, then they invented new desserts and new ways of making them.

When women could not go out to buy their children clothes, then they simply made them. When there was a shortage of fabric, then they took apart their own dresses, skirts and blouses to sew new outfits for their daughters.

Rather than discussing the suppression of free speech or the lack of freedom, the talk was about the rationing of food and the creativity required to bake sweets for one’s family when there is a lack of materials to do so. It was about mixing chicharo (split peas) with coffee beans before grinding so that the cafecito, a staple of Cuban culture, will last longer. The conversation was about the sadness that comes from not having enough fabric to sew a decorative – and therefore frivolous – bow onto your little girl’s dress.

One of the women said, “Life here in the United States isn’t easy, but there is hope. And in Cuba,” she said, “there is nothing to hope for.” And that made me feel sadder and yet, also more optimistic, than anything I’ve heard in a long while.

And maybe this is really what bridal showers should be. Maybe if we simply look past the seeming frivolity, if we look past the gossip and triteness, maybe there is something to be said for seeking the wisdom of older women. Maybe there is courage in dressing up and putting on our best face and participating in rituals, traditions and events. Maybe in this way, we shower the bride not only with presents and unsolicited advice, but most importantly, with lessons of what it means to be a wife and mother.

Maybe. But, honestly, I am still grateful for the mimosas.