We all piled into the school gym wearing our new, originally designed t-shirts, made in our school colors, teal and white.  The sound system was on, the bleachers were down and the photographer was set up and snapping away. 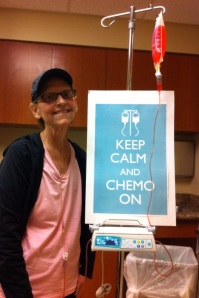 When Jenni Susi was diagnosed with cancer, doctors said she had two years left to live

According to the American Cancer Society, ovarian cancer is the fifth deadliest cancer in women, partially because the symptoms are so common to other illnesses — they include swelling or bloating ,and  pain in the belly— that it often goes undiagnosed far too long.  Something that Jennie knows from firsthand experience.  Four different doctors told her that she was fine.  It was the fifth doctor that finally diagnosed her cancer.  He instructed her to get her affairs in order because she’d have, at most, two years left to live.

That was eight and a half years ago.

Jennie decided that “statistics are just statistics. I’m going to be one of the positive statistics.”  And, in so many ways, she is.  She has fought this disease and undergone several surgeries, chemotherapy and all of the physical and emotional ups and downs that accompany treatment.

And cancer is not the only hardship she’s faced.  Her husband has Multiple Sclerosis.  Her parents both passed away, within a year of one another.  Each of these alone is enough to break someone’s spirit; but, not Jennie.  Through it all, she’s never lost her zeal for life.

“People always ask me ‘How do you do it?’” she says.  “And of course, there are days and times when I’m upset, but what good is that going to do? How is that going to help me?”  So, in her weakest moments, she allows herself a “one-hour pity party.”  Then, she chooses to get up and look on the bright side of things again because no matter how bad things are, she says, life is a gift.

Jennie credits her family for her inherent optimism.  Her parents who taught her to be positive, even in the face of adversity, and her brother who taught her how to be happy.

“I have an older brother who has Down Syndrome and he’s just SO happy, and pure in his joy. He was my greatest teacher. I try not to be wasteful of the gift I’ve been given – the gift of life. His purity radiates to me so I can be happy with my life, just the way it is.”

These are the lessons that she brings into the classroom.  She teaches American History, but she goes above and beyond – not only to prepare them for the End of Course Exams (EOCs) – but for life.  She went to school on the days that she was scheduled for chemotherapy and – if she was able to pull herself out of bed – was back at school the next morning.

So when Jennie didn’t come back to school, it was difficult for her students, friends and colleagues.  Doctors found more tumors and she had to have surgery to remove them and resection her colon, forcing her to take a leave of absence.

But even then, she did not forget her students.  She assured them that she was okay and would “stay calm and chemo on.”

“Ms. Susi is one of the most inspiring women I have ever met… even though she wasn’t able to come to school, she made sure that we were in good hands and she always sent us updates on her health and surprise emails to encourage us and tell us that she believed in us; it’s like she was always thinking about us,” said Carl Hughes, who was a student in Susi’s American History course and has kept in touch with her ever since.  Carl’s own mother lost her own battle with cancer, which made Susi’s struggle feel even more personal for him.

She made sure that he and all of her MLEC family knew that she was alive and recovering, and that she was thinking about them. 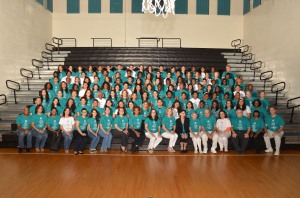 Jenni Susi’s MLEC family sits for a portrait, urging her to ‘Stay Calm, Chemo On’

And all of her school family was thinking about her.  So when her students created a design for her catch-phrase, “keep calm – chemo on,” Helena Castro, the school activities director and Jennie’s friend of 17 years, had an idea.  She had the design printed on t-shirts.  Teal and white, our school colors, are also the colors for ovarian cancer awareness.  She also included #teamjenniesusi, the hashtag trending on Twitter while Jennie was in surgery.

Hundreds of shirts were purchased and all of the proceeds went to the Ovarian Cancer Society.  Then, once Jennie was well enough, her school family surprised her with a pep rally in her honor.  She walked into the gym to find us all wearing our shirts, and we posed for a big MLEC family portrait.

“Too often we honor and immortalize posthumously,” said Castro.  “Jennie lives life fully and demonstrates compassion and resiliency and it is that zest for life that has served as a source of hope and inspiration to so many.”

originally published on July 2, 2013 on wlrn.org