Normally, I don’t watch much television. I rarely go to the movies. So I did not have much experience with Disney/Pixar films.

The waterworks start early in Disney/Pixar’s Up

But, with pandemic going on and all this time indoors, even I gave in.

Apparently, I am not alone.

While countless companies bleed money throughout the COVID19 crisis, streaming services are gaining ground. Recent reports show that although Disney lost billions since from park closures, their stock value rose as they announced over 100 million subscribers to their streaming services.

After catching up with over a decade of these Disney/Pixar films, I came to a few realizations. First, this generation of animated film makers — Generation X and maybe some older millennials — that have taken the reigns, have a much sharper focus on story telling. From Finding Nemo to Brave, the stories are well developed. Dynamic and complex characters go on heroic journeys of self-discovery. They manage to flesh out narratives that captivate viewers – young and old – with a dose of magic, emotion, and silliness.

But, the most obvious discernible fact is that Gen Xers are messed up. They are unpacking a whole lot of childhood trauma and they are taking all of us along on their emotional rollercoasters. From Inside Out to Onward, one thing is clear: they want us to cry, and I mean ugly cry.

This kind of sadism can only be born of personal suffering. The GenXers that are writing and producing movies now are deeply unhappy.

Whereas the classic Disney movies incited plenty of tears, they were of a different type.

Death strikes early in Finding Nemo, but that’s not the end of the tears.

Yes, there was danger, death and suffering. But, Snow White and Cinderella, even the 90s cartoons like Aladdin and The Lion King were different. In those, there was a clear-cut villain. There was a specific perpetrator that represented evil. There was the underlying message that we live in a cruel and unjust world, that those we trust the most can, and will, hurt us.

But in Pixar movies, our misery comes from within. The stories delve into the collective unconscious, triggering our own memories and bringing our own apprehensions to the surface.

In Toy Story, after growing up with Woody and facing down death and catastrophe time 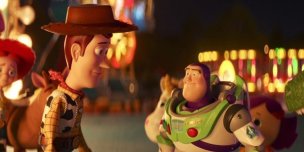 Andy is off to college. Bonnie doesn’t need him. Who is Woody without a kid?

and again, he finds himself—forgotten and unwanted, trying to figure out what to do with his life, who he is and what his purpose is after his kid leaves him behind. And, whether the child is two or eighteen, what parent hasn’t wondered the same thing?

In Up, the waterworks start early. Within the first five minutes, the audience meets young Carl and Ellie. We are there with them as they fall in love, marry, and grow old together. We are there, in the hospital room when Ellie dies. We are alone with Carl as he grapples with his grief and wonders if he let Ellie down, never fulfilling her thirst for adventure. And then there’s Russell, a lonely kid who misses his dad and yearns for his attention, but can’t even call him because Phyllis, presumably his stepmom, says that Russell “bugs him too much.”

These are deep wounds for Gen Xers. They came of age watching a whole other type of tragedy. Not only are they now caring for their parents while also sending their own children to college, they are still coping with their own childhood trauma. They are the first generation to really suffer through their parents’ divorces. Their parents, the Baby Boomers, divorced in record (and still unparalleled) numbers. As Boomers searched for fulfillment – in both their career and personal life ­– their children often felt left behind. These were, after all, the latch key children who watched and suffered the unintended consequences of their parents’ crises.

These movies are a way of working through and expressing it.

In Coco we face life, death and family.

Pixar films delve deep into the psyche and shine a light on what lingers there: our own baggage: our own losses and gains. They force us to face all the changes and losses yet to come, ultimately the ephemerality of life itself.

It is said that misery loves company. Box office profits prove that while GenXers may be profoundly unhappy, but they are certainly not alone.