My son is only three months old. He’s so little that even that phrase, my son, sounds foreign. Yet already I have planned imaginary future conversations.

Like so many, my family sacrificed everything so that I would never have to. What will he make of that? Will it inspire him? Weigh him down?

I’ve thought about time-outs during the terrible twos, about both of us blinking back tears on the first day of kindergarten, about homework and curfews, heartbreak, victory and defeat.

But today I find myself thinking about a whole other conversation, one that is much more complex. How will I teach him who he is? How will I instill a sense of culture and family history?

No doubt, many parents wonder the same. But, as President Obama shakes hands with Raul Castro, I wonder what my son will think of it.

My father was a political prisoner. He spent nearly 21 years in various Cuban gulags. His father was killed by firing squad. My mother’s father also spent years in Cuban cells.

My story is hardly unique. 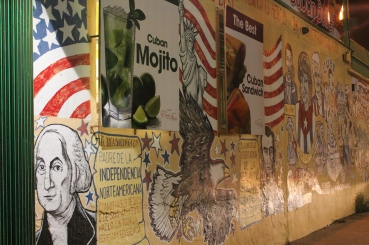 I was born and raised in Miami, a place unlike any other, a city in the United States but somehow worlds apart from it. I grew up between English and Spanish, a bridge between my families’ suffering, loss and tragedy and a new life in a new world. Like many others, I inherited my family’s pain. Their sense of loss, their forever exile, is something I grew up knowing and feeling as though it were my own.

My parents’ Cuba, their parents and grandparents’ Cuba, became a place alive only in woeful memories or impassioned political arguments. It became an archetype, a place that lived in our collective unconscious, a place we knew and felt and understood because of the hurt and loss embedded deep into the core of our existence. 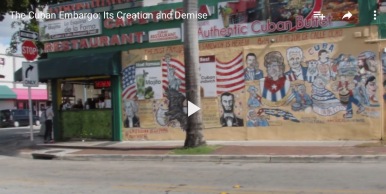 WATCH: “The Cuban Embargo: Its Creation and Demise,” a short documentary by Nathalie Mairena & Daniel Saiz

How do I preserve their history, their stories when even I grapple to make sense of it all? Especially as those stories become a little cloudy.

My father is gone. So are my grandparents. My mother doesn’t discuss her life there much. Some of those memories buried deep in her unconscious, the trauma too much for her to bear.

There aren’t family photos or ancestral artifacts to tell the stories of what life was like before, during and after the revolution. All those things stayed behind as families fled.

And now I rack my brain, trying to remember the good and bad, the laughter and the tears, and I try to imagine how I will share them with my son. Will I remember them? Will I do them justice? And what will he make of it all. What will he think? Will they form part of his identity? Will he listen patiently? Dismissively? Will he be curious? Will he feel Cuban? American? Both? Neither? Will he also yearn for a place that exists only in hearts and minds of a generation that is fading away?

If I lived between worlds, between languages and cultures, somehow — like the city in which I live — both American and not, what does that make him?

Cuba begins to change. Whether that change is good or bad — whether it leads to democracy on the island, whether Cubans’ lives improve — is unknown; but, change is certain.

And my parents’ Cuba, even the embellished romanticized memories, is even further away, less tangible.

Family stories, like history itself, fade away and I can only imagine how my son will see it, how he will see me, and who he will become.

“The Power of Words & Feelings: Semantics of Cuban Policy”

“In Miami, Change is the One Constant”