Teachers’ salaries will now be based, in part, on their students’ performance on state tests.

When my husband was studying for the CPA exams, he prepared for months.  He memorized laws and rules and exceptions to those rules.  He used flashcards, watched lectures and took simulated exams.  He answered thousands of sample test questions.

Preparing for exams is as much about tactic as it is about knowledge.  To conquer an exam, people learn to beat the test.  They learn strategies.  They take courses designed specifically to prepare them for these exams or they study on their own, for the tests.

For my husband, the hours of studying paid off.  He passed all four parts on his first attempt.  But, were these tests measuring what he learned in school?  Did it measure the knowledge that he gained during his undergraduate and graduate college career?  Are any of these professional exams (The Florida Bar Exam, Professional Engineering Exams, MCAT, LSAT, GRE, etc.) used to measure the effectiveness of a university or a professor? 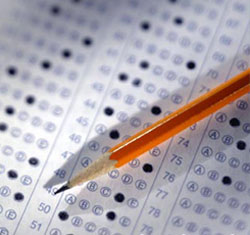 Data-based analysis of teacher performance is here to stay. Florida won a $700 million federal Race To The Top grant to design a statewide evaluation system that includes student test results in teachers’ evaluations.

No.  However, we do use tests to determine the quality of our schools and, as of July 1st, also our teachers’ performance.  Senate Bill 1664 requires that at least 50 percent of a classroom teacher’s performance evaluation, and pay, be based on the growth or achievement of the students.

And I understand why.  It is important to gage what students know.  We need to measure what they have learned throughout the school year.  And teachers also need an objective way to measure whether a particular method or lesson is effective.  It is equally important for schools and school districts to have a quantitative way to measure their teachers’ performance.

There are plenty of concerns about the fairness of teacher merit pay and whether test scores alone truly reflect a teacher’s effectiveness.  However, it is also fair to say that the only way to measure if a student has learned something, is to test him.  This is why there has always been a test.  And, more often than not, our test results determine a large portion of our future.  Passing a midterm and final in college was essential to passing a course.  Earning the right SAT score was crucial to get into college.  Passing those professional exams is the only way for doctors, lawyers, engineers and CPAs to obtain licensure.

However, since the introduction of No Child Left Behind we have entered an era of constant testing.  We’ve evolved from the High School Competency Test (HSCT) to the FCAT to the FCAT 2.0 to the End of Course Exams, the PERT and soon the PARCC, and so many other letters and abbreviations that I’ve left off of this list.

There are baseline exams, Fall Exams, Winter Exams, Interim Assessments, and on and on and on.  If your child attends a public high school in Miami-Dade County, he or she was probably testing from April through the end of the school year, especially if they were also enrolled in Advanced Placement courses.

Kids today are testing all the time.  And teachers are forced to adapt to that environment.  As much as teachers resist “teaching to the test,” I wonder how long they can continue to.  If a school’s success and a teacher’s efficacy is measured and determined by how her students perform on those tests, how long before the emphasis becomes beating that test?

The argument is not far-fetched.  For all of the school reforms that public education has undergone over the last ten years, for all the data and statistical analysis, high school students are not any better today than they were forty years ago.

According to the National Center for Education Statistics review, 17-year-olds’ average math and reading scores have not improved.  The tests have not changed at all in 40 years.  But, unlike the tests used to determine school grades and teacher effectiveness, “Nobody teaches to the NAEP exam,” said Kati Haycock president of the Education Trust, “which is why it’s such a useful measure to what our kids can actually do.”

And while our students are, according to the FCAT, constantly improving, the average SAT score for the high school class of 2012 dropped, again.  The reading and writing scores were the lowest since the company began releasing the data in 1972, which is part of what fuels the movement towards the common core and college readiness.  But those movements also include more tests.

Students deserve the best possible opportunities.  They need to be prepared to face the world, to enter college and/or the work force.  They deserve good schools and effective teachers to help them get there.  That requires local school districts and legislatures to figure out ways to ensure that tax dollars are doing just that.  That all requires tests.

I just hope that as we develop these tests and exams and figure out a way to use statistical analysis to interpret all of that data, I hope that we do not lose sight of the importance of a well-rounded education.  I hope that we don’t sacrifice creativity and class discussion and critical thinking.

When I was in high school, there was one test: the HSCT.  There were hundreds of electives.  I took ceramics and creative writing and photography.  I learned about Sigmund Freud and how he influenced Salvador Dali’s art as well as Ernest Hemingway’s writing style.  I learned about existentialism and Kant’s moral imperatives and how those ideas manifested themselves in literature, government and architecture. The high school that I attended no longer offers those courses.  And although I do my best to incorporate art and news and history and philosophy in my daily lessons, I’m not sure how many other teachers do.  And I don’t know how many other teachers will.  Those things are not on the test.